Vitamins are substances our bodies need, which we get from either the food we eat or from a multivitamins. Vitamins are normally stored in the body. A person without enough of a vitamin stored in the body is "vitamin deficient" or has a "vitamin deficiency." Vitamin K is a substance that our body needs to form clots and to stop bleeding. We get vitamin K from the food we eat. Some vitamin K is also made by the good bacteria that live in our intestines. Babies are born with very small amounts of vitamin K stored in their bodies, which can lead to serious bleeding problems if not supplemented.

The purpose of this document is to review new aspects of vitamin K-deficiency bleeding (VKDB) and prophylaxis. VKDB is rare, unpredictable, and life-threatening condition. Warning signs such as minimal bleeds, evidence of cholestasis, and failure to thrive often are present but overlooked. The risk of VKDB are minimized if prophylaxis recommendations are followed and if warning signs are recognized and promptly acted upon. The next goal is the search for methods of identifying early. Few infants are destined to bleed, so that targeted prophylaxis can replace the current "prophylaxis for all."

Vitamin K deficiency can cause severe bleeding in breastfed infants owing to insufficient amounts of vitamin K in breast milk. The absorption of vitamin K is strongly dependent on the intestinal bile acids. Diminished or absent intestinal delivery of bile, which occurs during cholestasis, puts infants especially at risk for malabsorption of vitamin K, and other fat-soluble vitamins. Infants who have been breastfed exclusively are at the highest risk for late VKDB, particularly if the cholestasis has not yet been diagnosed. Many countries have introduced prophylactic regimens of vitamin K supplementation to prevent VKDB. The optimal dose, route, and frequency of administration of vitamin K, however, are still unclear.

"Vitamin K," the generic name for a family of compounds with a common chemical structure of 2-methyl-1, 4-naphthoquinone, is a fat-soluble vitamin that is naturally present in some foods and is available as a dietary supplement (2). These compounds include phylloquinone (vitamin K1) and a series of menaquinones (vitamin K2). Menaquinones have unsaturated isoprenyl side chains and are designated as MK-4 through MK-13, based on the length of their side chain (3). MK-4, MK-7, and MK-9 are the most well-studied menaquinones.

Vitamin K functions as a co-enzyme for vitamin K-dependent carboxylase, an enzyme required for the synthesis of proteins involved in hemostasis (blood clotting) and bone metabolism, and other diverse physiological function (4). Prothrombin (clotting factor II) is vitamin K-dependent protein in plasma, that is directly involved in blood clotting. Warfarin (Coumadin) and some anticoagulants used primarily in Europe antagonize the activity of vitamin K, and in turn, prothrombin (5). For this reason, individuals who are taking these anticoagulants need to maintain consistent vitamin K intakes.

All infants, regardless of sex, race or ethnic background, are at higher risk of VKDB until they start eating regular foods, usually at age 4-6 months, and until the normal intestinal bacteria start making vitamin K. This is because (6):

Some things can put infants at a higher risk for developing VKDB. Babies at greater risk include:

Since babies can be affected until they are 6 months old, healthcare providers divide VKDB into three types; early, classical and late. 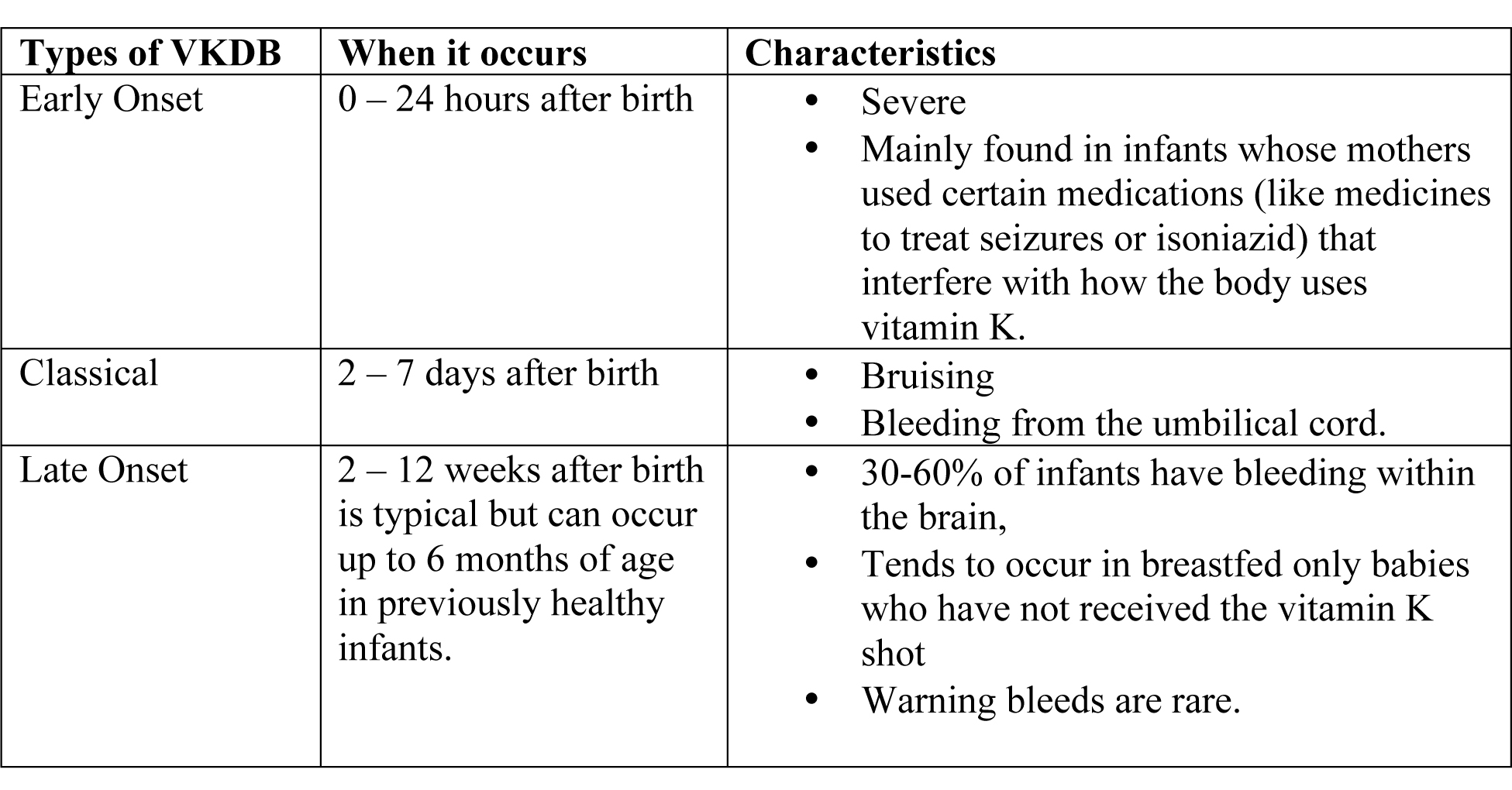 Early Onset VKDB
It is commonly associated with maternal malabsorption disorders and medications that inhibit the activity of vitamin K, such as antiepileptics (carbamazepine, phenytoin, and barbiturates), anti-tuberculosis medications (isoniazid and rifampicin), certain antibiotics (cephalosporins), and vitamin K antagonists (warfarin); moreover, it is more common in pregnant women who do not receive vitamin K prophylaxis before delivery (10). Recent studies have revealed that placental functions would be impaired in cases of pre-eclampsia and intrauterine growth restriction. These conditions affect the placental transfer of vitamin K (11). The incidence of early onset VKDB in at-risk neonates who did not receive vitamin K supplementation reportedly varied from 6% to 12% (12). Among cases that did not receive vitamin K administration before delivery, the occurrence of early onset VKDB is frequent, and the prognosis of such infants is poor because VKDB has a high incidence of intracranial hemorrhage (13).

Classic VKDB
It is associated with low vitamin K content in breast milk, poor feeding of milk, and/or inadequate vitamin K prophylaxis. It has good prognosis because its bleeding sites are typically located in the intestinal tract. In addition, a natural decrease in the activity of prothrombin during this period has been reported. Without vitamin K prophylaxis, classic VKDB is reported to occur in 0.25% to 1.7% of neonates without underlying diseases (14).

Late Onset VKDB
It occurs between 2 weeks and 6 months after birth, with an increased occurrence reported between 3 and 8 weeks after birth (15). It has an incidence of 4.4 to 72.0 per 100,000 live births in Asia and Europe. The late-onset VKDB is classified as idiopathic without risk factors of vitamin K deficiency except for breastfeeding or as secondary VKDB with risk factors of vitamin K deficiency, such as malabsorption or cholestasis, because vitamin K absorption closely depends on the intestinal availability of bile (16).

The hemorrhagic manifestations of late-onset VKDB mainly involve the gastrointestinal tract, skin, and central nervous system and present as intracranial hemorrhage. Most reported cases of late-onset have presented with intracranial hemorrhage. Late-onset VKDB is more frequent in the Asian population than the Caucasian population (17). This finding may be partially explained by dietary habits or the 6-fold higher incidence of biliary atresia in Asia than in Western Europe (18). Recent studies have confirmed that genetic variants of 10q24 are closely associated with the epidemiology of biliary atresia.

Diagnosis of VKDB in Infancy

Unfortunately, in the majority of cases of VKDB, there are no warning signs before a life-threatening event starts. Babies with VKDB might develop any of the following signs:

The diagnosis of VKDB is commonly indicated by a prolonged activated partial thromboplastin time (APTT) and prothrombin time (PT). VKDB is characterized by a PT international normalized ration (INR) >4 or a value >4 times the normal values in the presence of normal platelet count and fibrinogen level. The diagnosis is confirmed based on the increased levels of proteins induced by vitamin K absence or antagonists (PIVKAs) and a rapid normalization of coagulation parameters, such as APTT and PT, after vitamin K administration or both.

Although the serum vitamin K level is a useful status indicator, its use is not practical because of the technical difficulty involved (20). Reference values in healthy adults range from 0.2 to 1.0 μg/L (median, ~0.5 μg/L). The screening test program was substituted for prophylactic vitamin K administration because heel punctures are more invasive, difficult, and expensive than vitamin K administration (21).

Several factors have revealed that genetic factors can influence vitamin K-dependent coagulation system and intravascular hemorrhage (22). Further studies regarding the usefulness of testing for genetic variants to prevent and diagnose VKDB are warranted.

Many countries have introduced prophylactic regimens of vitamin K supplementation to prevent VKDB (23). The optimal dose, route, and frequency of administration of vitamin K, however, are still unclear. Oral and intramuscular (IM) regimens of vitamin K administration at birth have been proven effective in the prevention of classic VKDB (24). A single dose of IM vitamin K at birth can also prevent late VKDB. Between 1990 and February 2011, all infants in the Netherlands received a single oral dose of 1 mg vitamin K at birth, followed by a recommended daily oral supplementation of 25μg vitamin K between week 2 and 13 in breastfed infants (25). This regimen significantly decreased the incidence of late VKDB. In fact, in >80% of infants with biliary atresia (BA), severe late VKDB was the presenting symptoms. 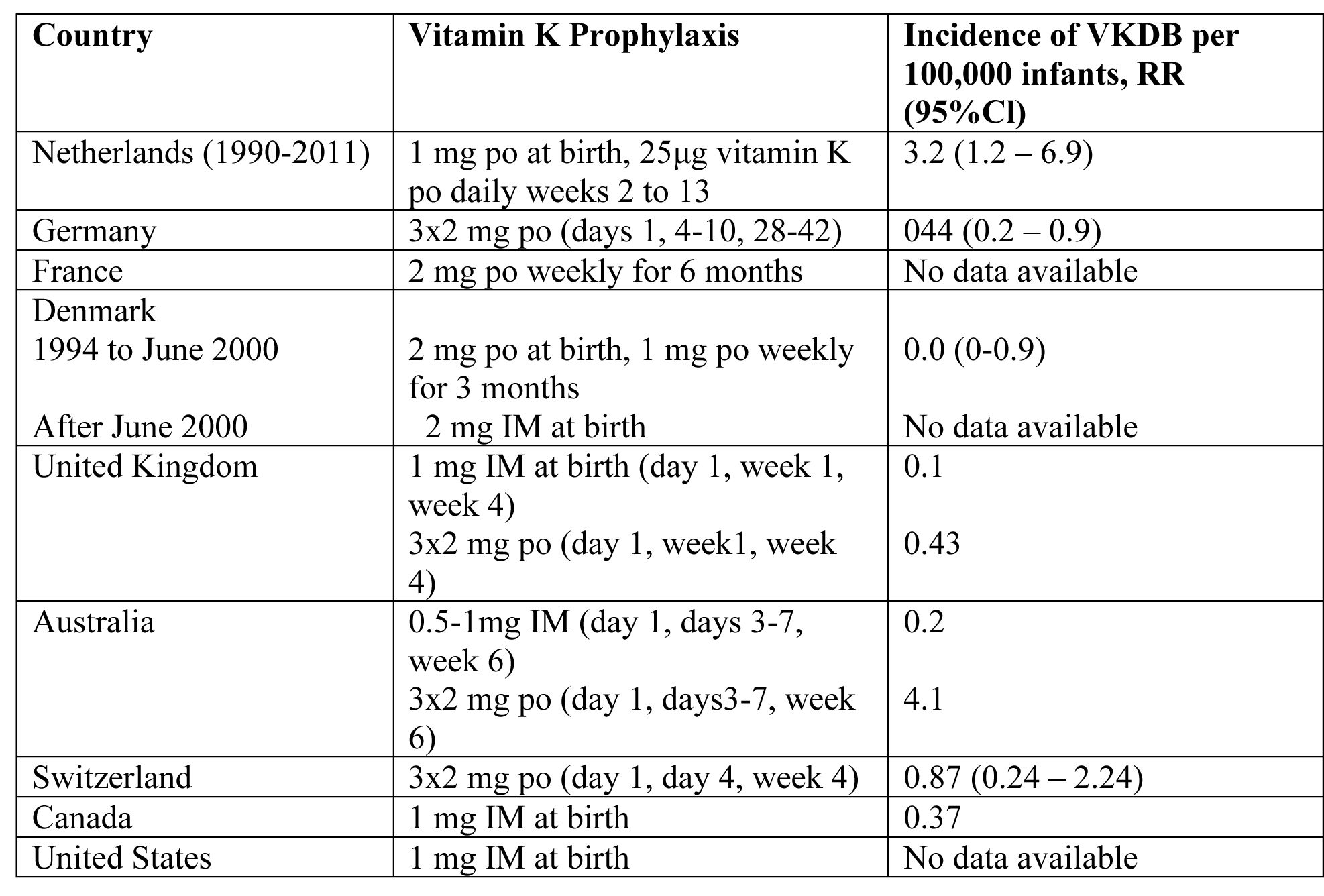 Recommendation of American Academy of Pediatrics (AAP) in USA

Because parenteral vitamin K has been shown to prevent VKDB of the newborn and young infant and the risks of cancer have been unproven, the AAP recommends the following (8):

Prophylactic Vitamin K for Prevention of VKDB in Preterm Neonates

Preterm infants are potentially at greater risk of VKDB because of delayed feeding and subsequent delay in the colonization of their gastrointestinal system with vitamin K producing microflora, as well as immature hepatic and hemostatic function. This study reviewed the effect of vitamin K prophylaxis in the prevention of VKDB in preterm infants (26). The conclusion was preterm infants have low levels of vitamin K and develop detectable PIVKA proteins during the first week of life. Despite being at risk for VKDB, there are no studies comparing vitamin K versus non-treatment and few studies that address potential dosing strategies for effective treatment. Dosage studies suggest that we are currently giving doses of vitamin K to preterm infants that lead to supraphysiologic levels.

Because of current uncertainty, clinicians will have to extrapolate data from term infants to preterm infants. Since there is no available evidence that vitamin K is harmful or ineffective and since vitamin K is an inexpensive drug, it seems prudent to follow the recommendations of expert bodies and give vitamin K to preterm infants. However, further research on appropriate dose and route of administration is warranted.

Prophylactic administration of vitamin K to prevent VKDB has been in practice for decades in USA, in both term and preterm infants. A single dose (1.0 mg) of intramuscular (IM) vitamin K after birth is effective in the prevention of classic VKDB in term infants. Either IM or oral (1.0 mg) vitamin K prophylaxis improves biochemical indices of coagulation status at one to seven days.

There is no consensus as to the ideal formulation. Ensuring that newborns receive vitamin k is particularly critical in places where access to health care and blood products and transfusions is limited. Anecdotal evidence suggests that an investigation into the barriers preventing access to and widespread use of vitamin K prophylactic treatments in low-resource settings is warranted. Vitamin K prophylaxis can prevent VKDB.

The World Health Organization (WHO) recommends that newborns receive 1 mg of intramuscular (IM) injection of vitamin K at birth (28).

With significant benefits observed in the incidence of VKDB, policy-makers and other stakeholders are likely to give a high value to the routine administration of IM vitamin K (1 mg) at birth. The WHO also now recommends routine prophylaxis in all resource-restricted countries (29).

The Vitamin K Ad Hoc Task Force of the American Academy of Pediatrics reviewed the reports of Golding et al, and other information regarding the US experience and concluded that there was no association between the intramuscular administration of vitamin K and childhood leukemia or other cancers (8).

Recent research on the pathogenesis of childhood leukemia additionally weakens the plausibility of a casual relationship between parenteral administration of vitamin K and cancer. Recent studies suggest a prenatal origin of childhood leukemia (31). This study found an acute lymphocytic leukemia-associated gene in 12 children with newly diagnosed acute lymphocytic leukemia and postulated that an in-utero chromosomal translocation event combined a postnatal promotional event results in clinical leukemia. Although intramuscular administration of vitamin K could conceivably be a postnatal promotional event, a genetic etiologic explanation further lessens the likelihood of a clinically significant relationship between intramuscular administration of vitamin K and leukemia.

Prevention of early vitamin K deficiency bleeding (VKDB) of the newborn, with onset at birth to 2 weeks of age (formerly known as classic hemorrhagic disease of the newborn), by oral or parenteral administration of vitamin K is accepted practice. In contrast, late VKDB, with onset from 2 to 12 weeks of age, is most effectively prevented by parenteral administration of vitamin K. Earlier concern regarding a possible casual association between parenteral vitamin K and childhood cancer has not ben substantiated. This revised statement presents updated recommendations for the use of vitamin K in the prevention of early and late VKDB. Given the high risk of mortality and morbidity in infants with late VKDB, it seems advisable to administer IM vitamin K prophylaxis to all neonates (term and/or preterm) at birth. Further studies should compare the efficacy and safety of multiple oral doses with IM vitamin K and also evaluate the optimal dose of vitamin K in preterm neonates.