During primary surgery for advanced stage epithelial ovarian cancer all attempts should be made to achieve complete cytoreduction. When this is not achievable the surgical goal should be optimal (<1cm) residual disease. Due to high risk of bias in the current evidence, randomized controlled trials should be performed to determine whether it is the surgical intervention or patient-related and disease-related factors that are associated with the improved survival in these groups of women. The findings of current reviews is that women with residual disease <1cm will do better than women with residual disease >1cm should prompt the surgical community to retain this category and consider re-defining it as near optimal cytoreduction, reserving the term suboptimal cytoreduction to cases where the residual disease is >1cm (optimal/near optimal/suboptimal instead of completer/optimal/suboptimal). Optimal cytoreduction (defined as microscopic) is associated with improved survival. The ability to achieve optimal cytoreduction is likely a factor of tumor biology and surgeon aggressiveness. There is no reliable way to predict pre-operatively the ability to achieve optimal cytoreduction. Secondary cytoreduction, in the appropriate patient population, may be associated with improved survival. 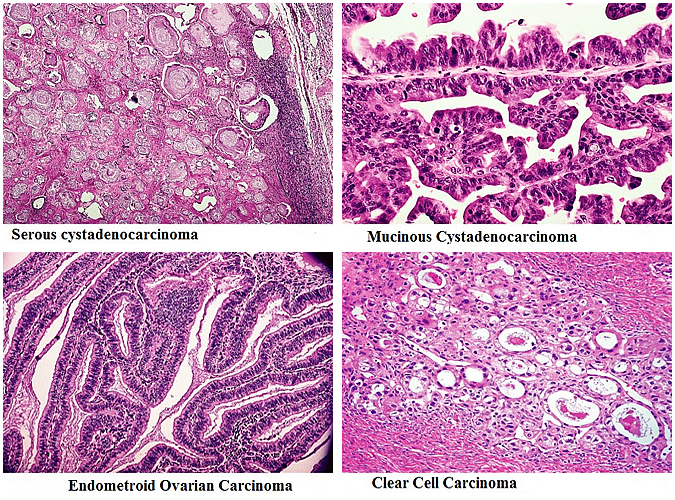 Patients who progress on two consecutive therapy regimens without evidence of clinical benefits have diminished likelihood of benefiting from additional therapy. Decisions to offer clinical trials, supportive care, or additional therapy should be made on a highly individual basis.
In general, the experts recommend combination regimens based on randomized trial data, especially in first relapses.
*In patients who have not previously received bevacizumab.
¶Platinum-based combination therapy should be considered for platinum-sensitive recurrences.

The definition of recurrence is not standard. Recurrence is divided into three categories:

Although most patients with ovarian cancer experience a response to initial treatment, 75% to 80% will experience a relapse of their disease (23). Patients with ovarian cancer will often receive multiple types of recurrence therapy, because their disease frequently responds to sequential therapies. Recurrence therapy for patients with epithelial ovarian cancer, fallopian tube cancer, and primary peritoneal cancer a new preferred regimen has been suggested  carboplatin/gemcitabine/bevacizumab (category 2B), based on the recent OCEANS trial (24). This phase III randomized trial assessed carboplatin/gemcitabine with and without bevacizumab in patients with platinum-sensitive recurrent ovarian cancer who had not previously received bevacizumab. In patients receiving the chemotherapy/bevacizumab arm, progression-free survival increased when compared with chemotherapy alone, 12.4 vs. 8.4 months (25). However, overall survival was not increased in the chemotherapy/bevacizumab arms. Combination therapy with bevacizumab is a category 2B recommendation, because there is less consensus that this intervention would be routinely used by the panel members. Many of the experts feel that other combination regimens may be more beneficial and effective than those with bevacizumab. In addition, the carboplatin/gemcitabine/bevacizumab regimen is only recommended in patients who have not previously received bevacizumab. Based on 2 phase II trials, bevacizumab alone is potentially active in patients who have recurrent disease (especially those with ascites), which is reflected in the category 2A recommendation for single-agent bevacizumab (26).